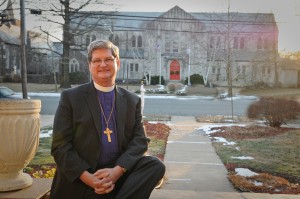 The Right Reverend William H. (Chip) Stokes is the twelfth Bishop of the Diocese of New Jersey.  Elected on May 4, 2013, he was Consecrated on November 2, 2013 and succeeded The Right Reverend George Councell.

Prior to becoming the Bishop of New Jersey, he served as the Rector of St. Paul’s Episcopal Church in Delray Beach, Florida, a position he held from January 1999 through July of 2013. From 1995 to 1998, he was the Associate for Christian Education at the Episcopal Church of Bethesda-by-the-Sea in Palm Beach, Florida.  Prior to this, he served as the School Chaplain and Curate to Grace Episcopal Church and Day School in Massapequa, Long Island, serving there from 1990 to 1994.  Bishop Stokes earned a Master of Divinity Degree from the General Theological Seminary in New York in 1990 and a Bachelor of Arts from Manhattan College in 1987; he was recently awarded an honorary Doctorate of Divinity from the General Theological Seminary.

He is a recognized preacher and Christian educator.  He has been active in the area of anti-racism, is a certified trainer in multi-culturalism and anti-racism and was a member of the Committee on Anti-Racism for the Episcopal Church.   He has served at many levels of governance in the Episcopal Church.  While in Florida, he served as Chairman of the Board of Episcopal Charities of Southeast Florida.   He was an active leader in his community in Delray Beach serving on several Boards and Committees and working actively to see that St. Paul’s was actively engaged in the life of the city.  He currently serves on the Board of Trustees of General Theological Seminary.

He and his wife Susan have been married for 38 years and live in Trenton.  They have four grown children, one granddaughter and a grandson.