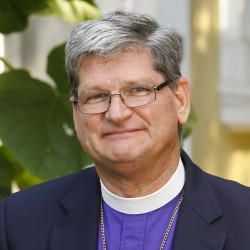 Dear People and Friends of the Diocese of New Jersey,

“Then from a cloud came a voice that said, ‘This is my Son, my Chosen; listen to him!'”

Today, churches throughout the world – Anglican, Roman Catholic, Orthodox, and others – observe the Feast of the Transfiguration. The Gospels all portray what is clearly a mystical event – numinous and puzzling. The disciples who witnessed it didn’t get it, at least as it was occurring or even in the immediate aftermath.

As a mystical event, it is by definition strange, supernatural, obscure. The Transfiguration anticipates Easter. Many have recognized that the transfiguration of Christ prefigures his resurrection. It is a blaze of light for Jesus and his disciples as they all begin the darker journey to Jerusalem and the cross; a journey marked in Luke’s Gospel at chapter 9, verse 51, just a few verses after the Transfiguration account: “When the days drew near for him to be taken up, he set his face to go to Jerusalem.” Biblical scholars have long noted that from this moment on in Luke’s Gospel, Jesus’ there is a relentless movement toward Jerusalem, Jerusalem and the cross.1

The words spoken out of the cloud seem significant: ‘This is my Son, my Chosen; listen to him!’ (Lk 9:35) Listen to him about what? 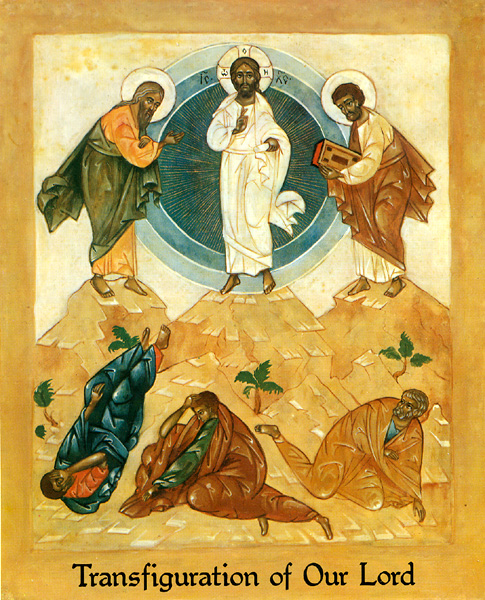 In the verses immediately preceding the Transfiguration account in Luke, Jesus is at prayer, alone, “with only the disciples near him” (Luke 9:18). He asks them, “Who do the crowds say that I am?” They answer him, “Some say John the Baptist; but others Elijah; and still others that one of the ancient prophets has arisen.” Jesus asks them, “But who do you say that I am?” (Lk 9:18-20).

In Luke’s account (and also in Mark and Matthew), Jesus makes very clear what he understands this to mean. Jesus said to them: “The Son of Man must undergo great suffering, and be rejected by the elders, chief priests, and scribes, and be killed, and on the third day be raised” (Lk 9:21-22).

It is his first passion prediction. But Jesus doesn’t leave it there with a prophesy about his own future. He also teaches them, and us, what it means to be his disciple:

“If any want to become my followers, let them deny themselves and take up their cross daily and follow me. For those who want to save their life will lose it, and those who lose their life for my sake will save it. What does it profit them if they gain the whole world, but lose or forfeit themselves? Those who are ashamed of me and of my words, of them the Son of Man will be ashamed when he comes in his glory and the glory of the Father and of the holy angels. But truly I tell you, there are some standing here who will not taste death before they see the kingdom of God” (Lk 9:23-27)

Then from a cloud came a voice that said, “This is my Son, my Chosen; listen to him!” 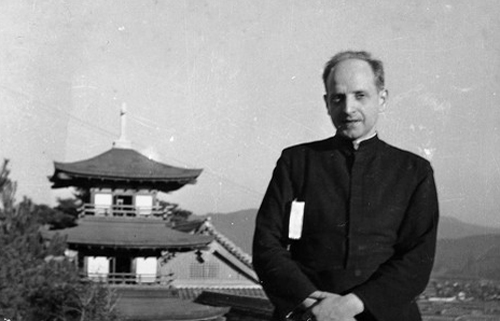 On August 6, 1945, a blinding light flashed in the room of Fr. Pedro Arrupe of the Society of Jesus.3 A former medical student, the Basque Spanish priest was serving as Superior and Novice Master at the Jesuit apostolate in Hiroshima, Japan. He had been in Japan at the start of the war and was even arrested as a suspected spy.4 He was later released and continued to serve the faithful, and especially the novices, in Hiroshima. He was there when American forces dropped the 9000 pound atomic bomb on the city, killing an estimated tens of thousands of people and inflicting brutal burns and injuries on more than 150,000 more. Arrupe, drawing on his medical training, immediately began to tend to the injured and to the challenges of the wider devastation. He would later write:

“It is at such times that one feels most a priest, when one knows that in the city there are 50,000 bodies which, unless they are cremated, will cause a terrible plague. There were besides some 120,000 wounded to care for. In light of these facts, a priest cannot remain outside the city just to preserve his life. Of course, when one is told that in the city there is a gas that kills, one must be very determined to ignore that fact and go in. And we did. And soon we began to raise pyramids of bodies and pour fuel on them to set them afire.”5

“If any want to become my followers, let them deny themselves and take up their cross daily and follow me. For those who want to save their life will lose it, and those who lose their life for my sake will save it,” Jesus said to his disciples before he climbed Transfiguration Mount. Fr. Pedro Arrupe’s life and witness gave modern day expression to these words.

Fr. Pedro Arrupe would later become Superior General of the Society of Jesus and many considered him the “second founder” of the Jesuits after St. Ignatius.6 He had compassion for the poor, calling the church always to address injustice in the world. I am reminded of Pedro Arrupe and often think of his story on this feast day.

In our world and society today, filled with so much hatred, anger and division; where so many have difficulty looking beyond themselves and their own self-interests, only Jesus and his light can deliver us from “the disquietude of this world.”7 How do we hear those words that call out from the cloud to us today – “This is my Son, my Chosen; listen to him!” How are we called to take up our cross and follow Jesus and his light on this Feast of the Transfiguration?

May God bless you and lead you in Christ’s transfigured light.

1 See, for example, comment by Johnson, Luke Timothy in Sacra Pagina – The Gospel of Luke – ed. Harrington, S.J. Daniel J. (Collegeville, Minnesota: A Michael Glazier Book of The Liturgical Press, 1991) p. 163-165.
2 See Bonhoeffer, Dietrich “The Cost of Discipleship” in A Testament to Freedom ed. Jeffrey B. Kelly and E. Burton Nelson (San Francisco: HarperSanFrancisco, 1995) p. 313.
3 See “Fr. Pedro Arrupe, SJ’s Account of Ministering to Victims of the Hiroshima Atomic Bomb” on the website Jesuit.org – August 6, 2021 – found at https://www.jesuits.org/stories/fr-pedro-arrupe-sjs-account-of-ministering-to-victims-of-the-hiroshima-atomic-bomb/?fbclid=IwAR3Snewc1NSucLyOzbDC4YMN5rfs6X6p1E6tSD3Xc8k_WMqGIeRDPVbcp1M
4 Biographical details supplemented by the Wikipedia entry on Pedro Arrupe, S.J. found at https://en.wikipedia.org/wiki/Pedro_Arrupe
5 Jesuit.org – art. cit.
6 Wikipedia – art. cit.
7 See the Collect for the Feast of the Transfiguration, Book of Common Prayer (1979), p. 243.
PrevPrevious MessageStewardship, the Threshold of August, and Time to Mask–July 31, 2021
Next MessageBuild up Children, not Prisons!–August 13, 2021Next

Fill out the simple form below and we will be in touch as soon as possible!

Nationally-recognized baritone vocalist, Keith Spencer, and award-winning composer and arranger, Peter Hilliard, team up once again after their symphonic success, Brothers on Broadway: A Celebration of African American Leading Men

All Deacons (active, partially active, and retired) in the Diocese of NJ are invited to attend a weekend retreat in Mendham, NJ. Space is limited. Details for registration coming soon.

Join us for an afternoon of live Jazz! The Steve Minzer Quartet will be performing at St. Francis. Light refreshments will be served. In lieu of ticket sales, we ask

“Be still and know that I am God!" (Psalm 46:10) Our world is complex and it can be overwhelming and our thoughts can sometimes be scattered. Where is God in

A chance for the Diocese to come together to discuss current issues, share fellowship, worship, and work together on challenges facing us today. Register in advance for this meeting: https://bit.ly/LayTownHall

A chance for clergy of the Diocese to come together to discuss current issues, share fellowship, worship, and work together on challenges facing us today. Register in advance for this

Proceeds to benefit ministries of Trinity Episcopal Cathedral “So, whether you eat or drink, or whatever you do, do all to the glory of God.”—1 Corinthians 10:31 On Monday, Oct.

“Be still and know that I am God!" (Psalm 46:10) Our world is complex and it can be overwhelming and our thoughts can sometimes be scattered. Where is God in

You are invited to a Zoom meeting. When: Sep 14, 2021 11:00 AM Eastern Time (US and Canada)   Register in advance for this meeting: https://dioceseofnj.zoom.us/meeting/register/u5Aldu6uqjsoJRTU_O2nW6PyZP0wNYqwzA   After registering, you

Topic: Deans’ Meeting Time: Every month on the Third Thursday 11:00 AM Eastern Time (US and Canada)   Please download and import the following iCalendar (.ics) files to your

A chance for the Diocese to come together to discuss current issues, share fellowship, worship, and work together on challenges facing us today. Register in advance for this meeting: https://bit.ly/LayTownHall

A chance for clergy of the Diocese to come together to discuss current issues, share fellowship, worship, and work together on challenges facing us today. Register in advance for this

Thank you for your patience!

Your story is currently being submitted to our moderator for review. You will be redirected when your story is successfully submitted!