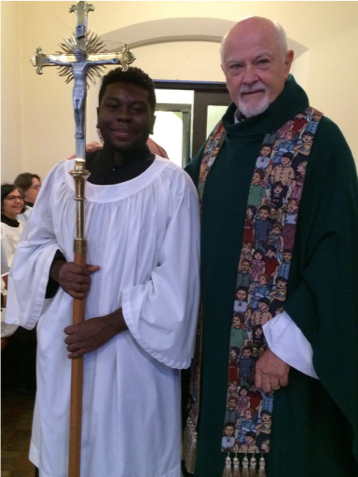 After 51 years as an Episcopal priest, Father William C. Noble is leaving his call as Priest-in-Charge at St. James’ Long Branch, on June 27. He is not retiring but is moving his ministry to North Carolina.

Friends and parishioners will celebrate the ministry of Fr. Bill and his wife Liliane following the 10 a.m. mass on June 27. Long Branch Mayor John Pallone is expected to attend.

A licensed psychoanalyst, retired Army chaplain (including time at Arlington National Cemetery), and former high-school English teacher, Father Noble’s long and varied career as a priest has taken him from his ordination in Georgia in 1970 to Maryland, West Germany, New Jersey, Virginia, Kansas, Belgium, New York, and back to New Jersey where he has served the past five years at St. James’ in Long Branch.

At the age of 17, a family crisis led Noble to seek church in an effort to find unity and hope. Though he had always believed in God, the experience of the Episcopal church was so compelling that he was now drawn to serving the church. Armed with a BA in English from The University of the South in Sewanee, Tennessee in 1962, he taught high school English for a couple of years before entering General Seminary in New York City in 1965.

Over his 51-year tenure Bill has used his gifts to work toward the good of the church, no matter where in the world he was serving or in what capacity. Bill has a vision for the church in today’s world and along with his incredibly high energy level, he works tirelessly to invite those with whom he comes in contact to walk with him on the journey. “The church must be always on mission, never a museum,” said Bill.

In 1975 Father Noble became a chaplain in the US Army, serving first in Fort Polk, Louisiana, where he met and married Lilliane Guyon. They were soon transferred to West Germany and over the next 20 years they and their two young children moved 13 times, crisscrossing the Atlantic Ocean to serve in both Europe and the United States.

One of the most challenging posts in which Father Noble served was that of Chaplain at Arlington National Cemetery in the mid-1970s. During that time he often performed seven funerals a day. Because he only had about 15 minutes with the family before the ceremony, Father Noble said, “I learned to listen and how to honor the other person.” In this setting Father Noble said, “I saw firsthand how the church puts the best against the worst that life offers. The church, he said, reassures us that “out of death there is a possibility of hope.”

In 2006, Father Noble returned to the world of academia and received a certificate in Marriage and Family Therapy and Psychoanalysis from the Blanton Peale Institute in New York City. In addition to his work as a priest, Father Noble also has a private practice in psychoanalysis.

When asked about his own faith journey, he said, “I look forward to every Sunday. To me the Eucharist is the most important part the week. There are three special moments: To take bread, to break, and to give in feeding to others.”

He said, “To me the best sermon is delivered of a prepared heart. I try to accomplish this.”

Fill out the simple form below and we will be in touch as soon as possible!

Thank you for your patience!

Your story is currently being submitted to our moderator for review. You will be redirected when your story is successfully submitted!