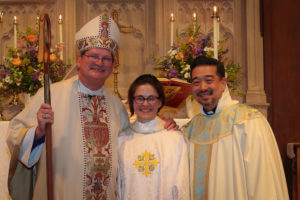 The Reverend Allen M. Wakabayashi has been named the Episcopal Chaplain at Princeton University. Wakabayashi comes to the chaplaincy after serving as curate for St. Luke’s Episcopal Church in Gladstone, NJ. He led the congregation’s high school and youth ministries, led Outreach in the parish through using Alpha materials, led and started new discipleship ministries and Bible Study groups, and shared in pastoral and worship duties throughout his year-long tenure. He was ordained an episcopal priest after completing seminary studies at Nashotah House in 2017; his wife, Diane, is also an Episcopal Priest. Wakabayashi will begin his tenure on August 15.

“Allen’s tremendous experience in Christian campus life and pastoral sophistication makes him a wonderful candidate for the Episcopal Chaplaincy at Princeton University,” said the Rt. Rev. William Stokes, Bishop of New Jersey. “We are excited for his ministry, both on campus and within the diocese as a whole.”

Wakabayashi brings nearly 20 years of on-campus Christian Formation and leadership experience to Princeton University; from 1989 to 2008, he served in various leadership roles in Intervarsity Christian Fellowship in Illinois, first at Millikin University in Decatur, IL, then at Northwestern University in Evanston, IL. At Northwestern, he rose to the responsibilities of Area Director and Team Leader, where he implemented successful strategies involving the interaction between five separate and diverse campus ministries. After leaving Northwestern, he served as Associate Pastor at Twin City Bible Church in Urbana, IL, where he led college ministries and planted a second site in a midtown location, which tripled in size across two years.

“I am tremendously excited about working with Allen to share the good news of Jesus Christ with the entire Princeton community: undergraduates, graduate students and postdocs, music students, and seminarians,” said the Rev. Dr. Kara Slade, Theologian-in-Residence at Princeton University and Trinity Episcopal Church in Princeton. “With our student leaders and community advisory board, we have an energetic and gifted team in place to welcome new students, as well as invite our returning students to grow ever closer to God in Christ. Princeton University’s motto is Dei sub numine viget – she flourishes under God’s protection – and I pray that ECP will continue to flourish by God’s grace as a unique, life-transforming ministry within the Episcopal Church.”

ABOUT THE EPISCOPAL DIOCESE OF NEW JERSEY

Founded in 1785, the Diocese of New Jersey ranks sixth in size out of 100 domestic dioceses in the United States, with 144 congregations within its borders. The Right Reverend William H. (Chip) Stokes, the current diocesan bishop and twelfth bishop of the Diocese, was elected in May 2013 and consecrated in November 2013. For more on the Diocese, please visit DioceseofNJ.org.

Trinity Church is an historic Episcopal congregation located at 33 Mercer Street in Princeton, New Jersey. It is the largest Episcopal church in New Jersey. Click here for more.

ABOUT THE EPISCOPAL CHAPLAINCY AT PRINCETON

Since 1876, the Episcopal Chaplaincy at Princeton has welcomed a wide range of God’s people responding to the Holy Spirit and living out a dynamic, thoughtful, and prayerful faith life in the richness of the Anglican tradition. Click here for more.