Juneteenth 2017: Traces of the Trade: A Story from the Deep North 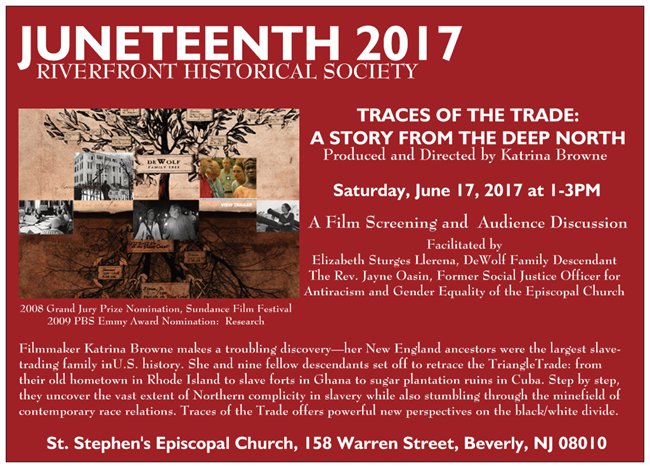 The Riverfront Historical Society and St. Stephen’s Episcopal Church continue their collaboration with their eighth annual commemoration of Juneteenth. This year’s program will include a film screening of the Sundance Film Festival and Emmy-nominated, PBS documentary film Traces of the Trade: A Story from the Deep North, followed by an audience discussion moderated by DeWolf family descendant Elizabeth Sturges Llerena and The Reverend Jayne J. Oasin. The program, scheduled for Saturday, June 17th, from 1-3 PM at St. Stephen’s Church in Beverly, is free and open to the public.

For more information, visit the website of the film at http://www.tracesofthetrade.org, which states, “Traces of the Trade documents how filmmaker Katrina Browne made a troubling discovery—her New England ancestors, The DeWolfs, were the largest slave-trading family in U.S. history. The DeWolfs conducted the trade over three generations, beginning in 1769, and well after it had been banned in the United States in 1808. The DeWolf family brought over 10,000 African slaves to the Americas. Up to half a million of these Africans’ descendants are alive today. Katrina Browne and nine fellow descendants set off to retrace the Triangle Trade: from their old hometown in Rhode Island to slave forts in Ghana to sugar plantation ruins in Cuba. Step by step, they uncover the vast extent of Northern complicity in slavery while also stumbling through the minefield of contemporary race relations. Traces of the Trade offers powerful new perspectives on the black/white divide….The issues the DeWolf descendants are confronted with dramatize questions that apply to the nation as a whole: What, concretely, is the legacy of slavery—for diverse whites, for diverse blacks, for diverse others? Who owes whom what for the sins of the fathers of this country? What history do we inherit as individuals and as citizens? How does Northern complicity change the equation? What would repair -spiritual and material – look like and what would it take?”